I’ve recently been elected as a governor of West Acton Primary School, and this afternoon made my first official visit in this new role. West Acton includes about one sixth of the East Acton ward population in its catchment area – the area between North Acton Playing Fields, Horn Lane and the Western Avenue.

Infact, East Acton ward is so large that it includes all or part of the catchment areas of six primary schools – all of East Acton and John Perryn, and parts of Derwentwater, Southfield, West Acton and West Twyford. In addition, a number of local Catholic parents send their children to St Vincents Roman Catholic Primary in Acton Central ward.

Headteacher Sue Brown took me on a tour of the classrooms at West Acton. I was impressed with the warm atmosphere, and a clearly enthusiastic staff seeking to get the best out of the children. Like all Acton schools, West Acton is a wonderful mix of national backgrounds, and in particular has probably the largest proportion of Acton’s Japanese community. The school is currently having an impressive new hall being built, which should be finished in the spring. This will provide very welcome extra space in a school which was originally a first (infants) school but now caters for children from nursery age to eleven. 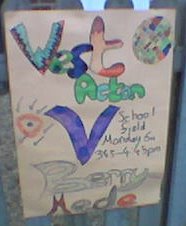 West Acton has an interesting history, as a pioneer of the Montessori school system. Acton Borough Council’s Education Director in the 1930’s – J Ewart Smart – was an enthusiast for the Montesori method – and my dad remembers it being around when he was a pupil at John Perryn School at the time. Smart made sure that Acton had a national reputation for employing Montessori-trained teachers, and Maria Montessori herself visited Acton schools at his invitation. Our local history museum at Gunnersbury Park have a collection of Montessori teaching materials and equipment from West Acton, from its opening in 1937, as well as photographs of classrooms with it in use at http://www.photolondon.org.uk/assoc_pages/gunnersbury/gunnpics1.htm

Posted by Philip Portwood at 11:39 pm No comments:

Philip is a lifelong resident of East Acton, where his family have lived since the 1880s. He is the longest-serving Governor at John Perryn Primary School on the East Acton Estate, where both he and his Dad were pupils.

Philip was the Millennium Mayor of the Borough. His current public service includes being a Lay Member of the NHS Ealing Clinical Commissioning Group, a Director of the Acton Community Forum, and a Trustee of the Acton (Middlesex) Charities.

You can email Philip at phil@east-acton.com. His twitter feed is @eastacton.